[Some of the links in this post are affiliate links; others are to related articles or to another site with pertinent information. For affiliate links, this means I earn a commission IF you purchase their products. Commissions earned are used to cover the costs of running and maintaining this site. There is no extra cost to you if you purchase any of the products.]

Have you ever wondered why technology is so expensive?  Why does the technology repairman charge more per hour than what many attorneys charge? Why does it feel like you get nickeled and dimed to death with technology costs?

There are many forces at work in this industry that make it an expensive component of administration for just about any business. The greatest impact upon cost has been the changes in hardware. The hardware changes affected software abilities and capacity. In addition to hardware and software changes, other forces including the internet, health care, and entertainment impacted the cost of doing business. All of these forces have an bearing in the market today. Each works like a cog in a sophisticated clock to move business forward in time. The following sections provide a brief description of the influence each of the underlying forces play in the economic change with information technology.

$5.99
Estimating and Draw WorkBook
Excel Spreadsheets for Use with 'A' Frame New Home Construction

I have a vivid memory of my brother buying a computer back in 1988. It was an IBM 80286 and had 256kb of RAM and about 10Mb of hard memory. It had two 5 ¼” floppy drives and ran with DOS 3.0.  It cost over $2,700 for the computer and the operating system. By the time he purchased a printer and other software, the price tag exceeded $4,000. It was pretty much one third the price of a new car. Now 26 years later, you can own a computer that is literally 1000 times more powerful with a basic software package for half the price. To compare, the modern computer is about 1/20th of the price of a new car. In effect, hardware is getting more powerful and the price per unit of measurement is decreasing. Below are some timelines of certain hardware characteristics and the corresponding price:

This graph illustrates the remarkable decrease in hard drive (storage) cost per unit over the last 35 years. 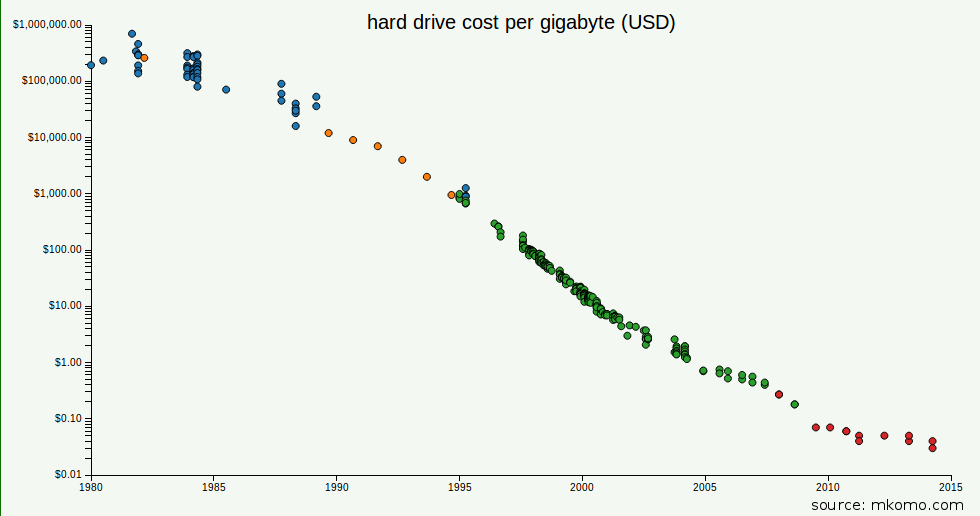 The above graph says it all. The scale is logarithmic which drives home the point about the cost per unit decreasing at such a phenomenal rate. Thank you Matt Komorowski for this informative graph. His article is located here: Cost per Gigabyte.

If the above is true, then how is hardware impacting the increasing cost of technology? Answer: Many other outside forces influence hardware costs. These forces include the frequency of replacement, national trend towards systems, the strong desire to access information from remote locations and using technology to increase production. The following subsections further elaborate on these four cost drivers for hardware.

In the late 80’s, the only software you needed was a DOS to run the computer and a few basic programs such as a word processing and spreadsheet. Today, software is involved in every detail of our lives. It exists in the cars we drive, the refrigerator in the kitchen and in our entertainment systems at home. The expanded hardware capacity works hand in hand with the software to give us information in a way we desire. To complicate matters the software engineers generally require the consumer to update the software regularly or they will not support the aged software. In effect, you as the consumer must upgrade or risk losing support.

A good example of this is my accounting software. The provider requires me to update no less than every three years. In the past I was driven to update because there were significant gains in ability within the software, today those gains are marginal at best but the company still requires me to update. My tax software is new every year which correlates to the changes in the tax code.

In highly specialized industries such as manufacturing or energy generation, the software is unique due to the high customization requirements. Therefore, the company is figuratively engaging a permanent software engineer to design, build and maintain this software. Thus there exists a high demand for technology folks in the market.

There are other forces that push costs higher still. A good example is the ever changing internet. In the past, connection to the internet was a hard wire requirement. This changed in the 2000’s as devices could communicate via wireless connection (additional hardware costs). Now we have ‘Hot Spots’ nationwide and access to the internet is no longer just cable based. Many homes access the internet via satellite communications (more hardware) especially those in remote locations.

In my opinion, one of the greatest changes in technology has occurred in medicine. This industry has modified itself dramatically as it has shifted away from invasive surgery when resolving medical issues to using chemical and noninvasive surgery techniques. I remember writing one of my Master Papers about the magnitude of this industry as it relates to the Gross Domestic Product. In the 90’s, medicine had reached over 9% of the Gross Domestic Product and based on the calculations and the sources of funding, I wrote that it will reach 14% of GDP by the year 2007. Today, it exceeds 16% of GDP and most of this is driven by the increase in technology medicine uses to further the patient’s quality of life.

On June 29, 2007 the iPhone was first introduced. Now, seven years later, we have the iPhone 6. In seven years, this one device has renewed itself six times. Apparently, they can’t get it right.  I have yet to get one and actually have zero desire. This is driven by the associated cost to own these highly advanced smart phones. I believe they cost in excess of $400 for the hardware piece alone. This $400 device can do more than the computer my brother bought back in the 80’s.

Notice a trend here? Although the cost of hardware in comparison to the historical cost is way down, the frequency of updates continues to drive the overall cost of technology higher. This doesn’t include the software aspect of all this.

This is just in the area of communication. If you begin to talk about the office environment, well, this same problem is magnified.  You not only have the computer network but there is a printing and data storage system to maintain too.

The market today for technology is constantly evolving and this fast paced change is the driving economic force for what really pushes the overall cost of technology higher. In a later article, I will provide tools for you to use to keep these costs down and under control. This article is written to identify the cost drivers of technology. Act on Knowledge.