As with most retirement plans the contributions are tax deductible, tax deferred and require minimum distributions at a certain point in the individual’s retirement. This article explains these basic rules.

It is important for the reader to understand that the primary benefit associated with any retirement plan is time value of money. By utilizing time and the compounding of earnings, retirement plans can generate significant financial resources upon retirement. The earlier you begin to save, the greater the value time will yield. Deciding to save after age 50 creates concern for inadequate funds upon retirement. Start early and consistently save every year.

Primary Benefit of an IRA

The primary benefit of an IRA is the tax deductible status of the contributions made by the taxpayer against the total gross income earned during the tax year. There is a caveat here; if the taxpayer or the taxpayer’s spouse has access to a retirement plan via their employer, the contributions are limited or completely eliminated based on the circumstances.

In general the taxpayer may deduct up to $5,500 for the tax year 2015. However, if the taxpayer is age 50 or older, there is an additional deductible allowance of $1,000 thus the absolute maximum is $6,500. This is referred to as the Catch-Up rule.

The benefit derived is naturally the savings associated with reducing your income tax.  So if you are in the 15% bracket and you contribute $5,000 then your tax savings would equal $750. This is much more beneficial to those living in states that also tax your income as income taxing states also recognize this deduction in determining their tax.

This appears to be a wonderful benefit; however there are limits and the basic limit is your adjusted gross income. In general the adjusted gross income is the total amount you record as income on your tax return. You may exclude any social security income. However, you must add back any passive activity losses. In tax lingo, this is referred to as Modified Adjusted Gross Income.

For the reader, the primary limiting question is access to a retirement plan at work for either you or your spouse. If you have no available plan via your respective employers, then your gross income limit is nonexistent; in effect you are free to make the maximum contribution to an IRA. However, if you do have access to a plan at work or your spouse has one, the following are the modified adjusted gross income limits:

I realize that this appears confusing. But basically the government is allowing those without access to a retirement plan the ability to contribute to an IRA. For those that have access, the government is limiting your access because they want you to participate in your employer’s plan. For most of my readers, you own your business or you are involved in a small business operation and the above may seem overwhelming. Suffice it to say that you may contribute to an IRA if you do not have a plan set up in your company. If you have a company plan, then basically you must use that plan to save for retirement and you should use that plan. After all you went through the trouble to establish the company plan so participate in that plan.

For those of you that are self-employed, set up an IRA through a broker or online account and make contributions. My final example relates to a very common group of married couples whereby only one spouse earns money and there is no access to a company retirement plan.

Joe and Patty own a small retail store.  Both work the store and the store nets them $110,000 per year. The store is legally owned by Patty and therefore the income is recorded on the combined return via Schedule C.  How much can they contribute to their IRA’s?

Answer:  Congress did not want to penalize the spouse, in this case Joe, so the rules allow both Patty and Joe to contribute up to their allowed amount based on age ($5,500 or $6,500) to their respective IRA accounts. The rules allow the one spouse that has no legal income the right to ‘Borrow’ the income from the earning spouse and use this amount as his compensation. If both are under age 50, then each may contribute up to $5,500 into their respective IRA’s for combined total of $11,000.

Once the contribution is made into the account, the second benefit for the taxpayer begins.

Tax Deferral on Income Earned in an IRA

The best part of saving money is taking advantage of compound growth. Basically compound growth is earning a return on your earnings throughout the life of the investment. The following chart illustrates this well. An initial investment in your IRA at age 24 and allowing it to grow to age 65 at 4.8% per year with an initial investment of $5,500 means that the account balance will equal $37,599 at the terminal end. 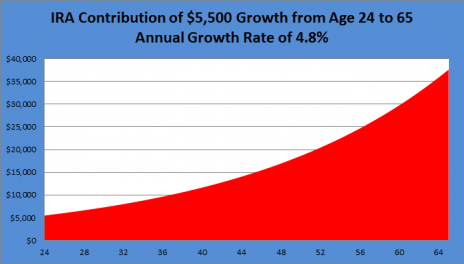 Since IRA’s are tax deferred, this means none of the earnings from year to year are taxed. If the earnings were taxed and for this illustration I’ll assume 15%, what would be the terminal value? Answer: $28,341. 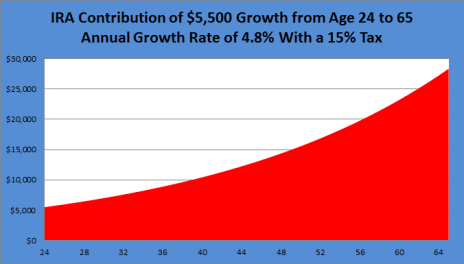 This is a whopping $9,258 difference between a true tax deferred investment and a taxed investment. Basically the taxpayer is earning money on the tax that otherwise would have to be paid. To gain the maximum benefit for an IRA the taxpayer should begin early in life depositing money into their Individual Retirement Account.

Once you get to retirement age, it is time to withdraw the money. Well, there are rules regarding distributions.

Your traditional IRA’s are subject to the same rules used with employer provided retirement plans. To begin, the most important rule is that you MUST begin to take distributions from your IRA no later than April 1 following the calendar year you turn 70 and ½ years old. As an example: if your birthday falls in November, you will turn 70 and ½ in May of the following year. This means that you must begin to take distributions by April of the next year. Basically, if your birthday is in November you can wait until you are 71 years and 4 months old to begin taking distributions.

The required minimum distribution is a formula based on the UNIFORM LIFETIME TABLE. This table basically determines the expected remaining life for the taxpayer based on their age once they hit age 70. In effect, the minimum distribution is lower at age 70 than at age 80. Essentially the table forces the taxpayer to continuously increase their minimum percentage as they age in order to deplete the IRA balances and pay the associated income taxes. There is no minimum requirement prior to age 70.

Most retirees defer taking distributions from their IRA’s until the required deadline and use other resources in the interim during the retirement years.

These are the most basic rules related to IRA’s. There are a bunch more rules but they involve early withdrawals which generally have abusive tax penalties. Other issues relate to death or early retirement. I have another article that gets into the nuances of these particulars. Since they are rather detailed and not really applicable for an introduction article, I did not discuss them here.

The main point of this article is that IRA’s act as a filler plan for many Americans that do not have access to an employer provided retirement plan. In addition, it augments existing employer plans especially those that provide only minimum contributions on behalf of the employee. Contributions are tax deductible and tax deferred while those funds reside in the IRA account. The tax deferral benefit allows the account balance to grow at a much faster rate than the traditional taxed forms of savings.

As a taxpayer and for your personal financial health you should take advantage of the IRA and begin to save money now. Act on Knowledge.

Value Investing is a Superior Program to any Other Model of Investing. Here's the Proof:
Click to Enlarge

Click to Enlarge
How Much More Proof Do You Need?

Seriously, it is highly unlikely this pattern will deviate dramatically over the next two to three years. AND this includes the Bear Market decline during 2022. The principles of Value Investing work!

Value investing is a systematic process of buying stock at low prices and selling once the stock price recovers. Its foundation is tied to four principles:
1) Risk Reduction
2) Intrinsic Value
3) Financial Analysis
4) Patience
Learn about value investing and gain access to lucrative information that will improve your wealth. Expect annual returns in excess of 18%. The investment club’s results during 2020 were 34% and 41% in 2021. Lifetime to date, the Fund is > 2.4 times the return for the DOW and 1.5 times the S&P 500. To learn more: